Suburban lawmaker says there’s a ‘war on police.’ Will his proposals help? State Rep. Marty Moylan, a Democrat from Des Plaines, says there’s a “war on police officers” and is proposing two pieces of legislation, as well as a funding boost for law enforcement, he believes will help end it.

According to data released by the FBI this fall, 60,105 law enforcement officers were assaulted in the line of duty in 2020 — up 4,071 from 2019 — and nearly a third of those attacks left the officer injured.

To state Rep. Marty Moylan, those numbers show there’s a “war on police officers” happening, and it’s leading not only to more attacks on cops but also to more crime in the suburbs. The Democrat from Des Plaines says he wants to help curb both with a pair of bills pending in Springfield and a proposed $100 million boost in funding for law enforcement.

“I had one police officer tell me that now he knows how his father, a Vietnam War vet, felt when he came home from Vietnam,” Moylan told us. “That’s how some of our police officers feel now.”

Moylan is sponsoring House Bill 4159, the Police Protection Act, which would create a new criminal offense called peace officer targeting. It would make it a felony punishable by two to five years in prison — and more for a repeat offender — to assault, intimidate, stalk, steal from, harass or vandalize the property of anyone because that person works as a police officer.

He’s also a co-sponsor of House Bill 4125, which would add hate crime enhancements to a host of offenses — including assault and battery — if they’re motivated by the victim’s employment as a police officer.

Moylan recognizes the link between shifting attitudes about police and high-profile instances of officer misconduct, but he told us, “Because of the mistakes of a few, you don’t condemn the whole organization.

“Police officers are here to protect us. We need them.”

What do police think?

When Moylan touted his proposals at a news conference last week outside Des Plaines city hall, standing at his side was Park Ridge Police Chief Frank Kaminski. He said the legislation, if approved, would send a powerful message of support to the law enforcement community.

“There’s been a lot of demonization of police, and morale is challenging right now,” he said. “The vast majority of police officers do a great job, and they’re now subjected to more attacks, more disrespect, and if we’re going to have policing in a democratic society, we have to get back to some semblance of respect for the police.”

As for the extra $100 million for police Moylan wants in the next state budget, Kaminski said it’s much needed to modernize police technology and infrastructure, as well as pay for additional training that’s been mandated by lawmakers.

“It’s going to take a lot of time, energy and money to meet (their) goals,” he said.

Kiante Tyler, the 21-year-old man accused of shooting Bensenville police officer Steven Kotlewski earlier this month, wants to be freed on a personal-recognizance bond and put under house arrest, according to a motion he filed Monday in DuPage County Circuit Court. 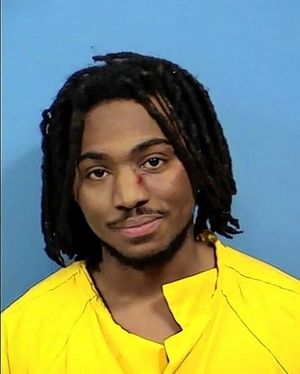 Tyler faces one count of attempted murder and three counts of aggravated battery alleging he shot Kotlewski nine times Nov. 5, when the officer responded to a domestic disturbance at the home of Tyler’s mother. He currently is being held without bail.

His next court date is Dec. 6.

In the meantime, don’t forget Bensenville on Saturday is holding a “Day of Support” for Kotlewski, who continues to recuperate from his wounds. The day will feature a blood drive, a candlelight ceremony in the wounded officer’s honor and a fundraising concert featuring “America’s Got Talent” runner-up Austin Edwards.

Overheard in the courtroom

Maybe it was reflection on the time of the year, but a defendant in Kane County Judge David Kliment’s court call Wednesday offered an unusual signoff — by praising the judge and all the lawyers, and thanking them. Sincerely.

“It really shows that you like it (their work) and you are good at what you do,” she said.

More reason for thanks

Lake County sheriff’s office police dogs Ryker, Danno, Dax and Duke also have reason to be grateful this week: Each are set to receive bullet and stab protective vests, thanks to a charitable donation.

The protective gear, courtesy of Massachusetts-based Vested Interest in K9s Inc., will be embroidered with the sentiment “Honoring Blue Paws Strong.” Expected to arrive within eight to 10 weeks, the vests are valued at between $1,744 and $2,283 each.

Since its creation, Vested Interest has provided police dogs across the country with more than 4,450 vests worth $6.9 million, made possible through private and corporate donations, officials said.

For more information on the organization or to donate, visit www.vik9s.org

About 60 men in the substance-abuse recovery pod at the Kane County jail received a treat Wednesday afternoon: a holiday meal, courtesy of Q’s Kitchen in St. Charles (and several dozen people who helped pay for it).

It is the second year in a row the catering business has done so, according to the business’ Facebook page.