Public Safety makes up the second largest area of spending in the Cook County budget next to the County’s health and hospitals system. The Public Safety Fund accounts for 17.1% of the entire Cook County operating budget in 2022, totaling $1.4 billion. In addition to the Public Safety Fund, many special purpose funds also support the criminal justice agencies. This analysis will examine the appropriations of each public safety office across all operating funds.

In general, the Public Safety program area of the County’s budget covers activities of the County’s criminal justice system including the Cook County Jail, the Juvenile Temporary Detention Center, the Circuit Court, and law enforcement. The Cook County budget also classifies the Public Administrator, which handles estates of the deceased, and the Chief Administrative Officer, which includes the Medical Examiner and Emergency Management—within the public safety program area. However, for purposes of this analysis, these two offices are excluded because they are not central to the operations of the County’s criminal justice system law enforcement functions. This analysis also excludes the Justice Advisory Council, which oversees the County Board President’s criminal justice reform initiatives and operates within the Offices of the President.

The spending levels for the five criminal justice offices adopted in annual Cook County budgets over the past five years are shown in the graph below. The FY2022 figures are those proposed in the President’s Budget Recommendation rather than the adopted figures because the Annual Appropriation Ordinance is not yet available as of this writing. The five offices include the Sheriff, Chief Judge, Clerk of the Circuit Court, State’s Attorney and Public Defender. Each official is separately elected, with the exception of the Public Defender, who is appointed directly by the County Board President. The Sheriff makes up the largest portion of total spending among these agencies at 47.5%, followed by the Chief Judge at 22.1%. 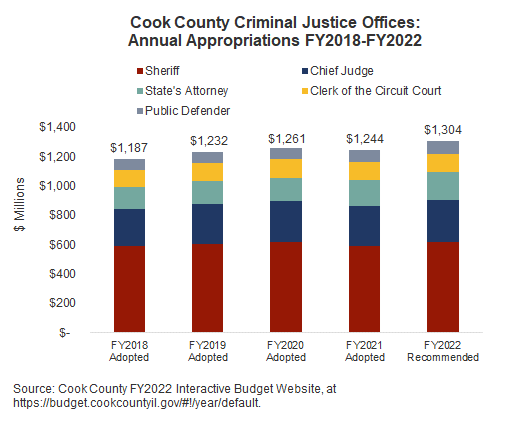 While all five of these offices’ budgets have increased over the past five years, some of the most notable increases during this period include: 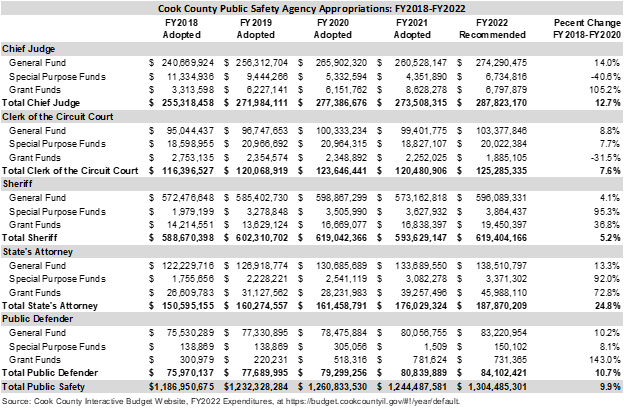 The Sheriff’s Office operates the County Jail, which is one of the country’s largest jail facilities located at a single site. The Sheriff also provides security for all court facilities. The Sheriff’s Police Department provides police services to the unincorporated areas of Cook County and certain municipalities.

The table below shows the number of personnel within each department of the Sheriff’s Office over the past ten years within the General Fund. This table excludes Sheriff’s personnel within the special purpose funds and grant funds (which account for small numbers of FTEs—61 special purpose fund personnel and 45 grant funded personnel in FY2022). The Sheriff’s total personnel budgeted within the general operating fund has decreased from 6,533.2 FTE positions in FY2013 to 5,720.0 positions in FY2022. This represents a decrease of 813.2 FTE positions, or 12.4%. The largest decreases over this period occurred in the Department of Corrections and the Court Services Division, while the Police Department increased slightly by 138.2 positions.

Several reorganizations have taken place over this ten-year period, and primarily between FY2013 and FY2014. In FY2014 the Sheriff’s Office moved the Sheriff’s Women’s Justice Programs and Reentry and Diversion Programs under the Department of Corrections to reflect the physical location of program staff and participants. Additionally, the Sheriff decentralized several administration functions that previously were housed under a central Department of Fiscal Administration and Support Services. Also in FY2014 the Financial Management, Procurement, Information Technology, Vehicle Services, Training Institute, Office of Professional Review, Central Warehouse, Drug Testing Unit, and Human Resources functions were distributed across three offices: the Office of the Sheriff, the Administration and Human Resources Department, and the Information Technology Department.[1]

The Cook County Circuit Court is the largest of the 24 judicial circuits in Illinois and the second largest unified court system in the world. The Office of the Chief Judge oversees the Court, which has approximately 400 judges and about one million new cases filed per year. The Chief Judge also oversees the Juvenile Temporary Detention Center and probation and pretrial services.

It should be noted that several budget amendments were included in the final adopted FY2022 budget for the Office of the Chief Judge that are not captured in the proposed FY2022 numbers in the table below. One of those amendments increases the number of positions in the Office of the Chief Judge by 20 FTEs in order to expand domestic violence court operations and establish 24/7 access for victims of domestic violence.

Even with the slight increase in domestic violence court staff, the Chief Judge’s FY2022 personnel will remain nearly flat from the prior year. Over the ten-year period from FY2013 to FY2022, the Chief Judge’s total FTE count has decreased slightly, by 2.4%.

Clerk of the Circuit Court

The Clerk’s personnel levels over the past ten years are shown in the graph below. Over this period, the Clerk’s personnel within both the County’s General Fund and the Clerk’s special purpose funds has decreased by 17.0%. However, the number of FTEs in FY2022 represents an increase of 93 FTEs or 6.8% from the prior year budget. Of those 93 positions, approximately 25 will be funded through American Rescue Plan Act funds and 60 will be for additional courtroom clerks. The Clerk will have a total of 1,323 FTEs budgeted in the General Fund and 143 special purpose FTEs in FY2022. 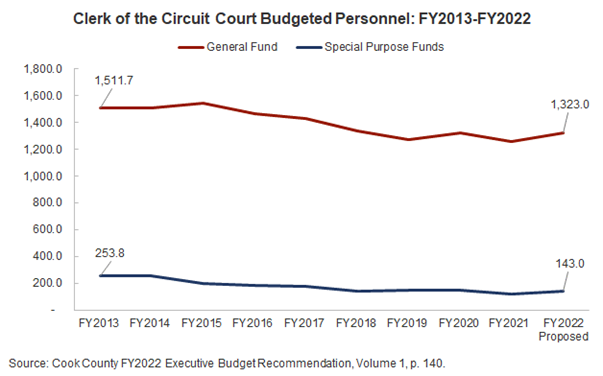 The State’s Attorney’s Office is the second largest prosecutor’s office in the U.S., with more than 700 attorneys. The office prosecutes all misdemeanor and felony crimes committed in the County, files legal actions to enforce child support orders, protect consumers and the elderly and assist victims of sexual assault and domestic violence, and serves as legal counsel for the government of Cook County. 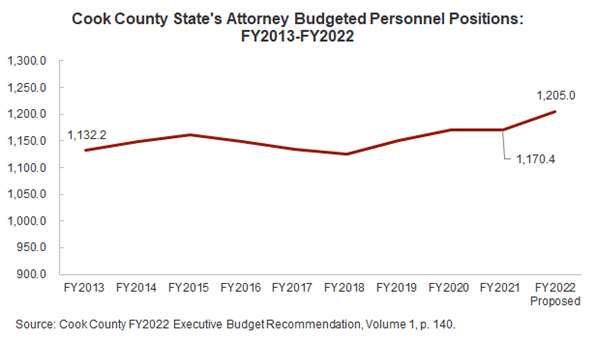 The Office of the Cook County Public Defender provides legal services for clients who are not financially able to pay for private legal representation in pending criminal, child protection and delinquency matters. The Public Defender, unlike the other four officials examined in this analysis, is appointed by the County Board President and the office’s budget is within the Offices of the President.

As shown in the graph below, the Public Defender’s personnel levels for many years were relatively flat, increasing from 674.4 FTEs in FY2013 to 694.0 in FY2021. The Public Defender will receive an increase of 46.0 personnel, or 6.6% in FY2022, which is the first significant increase over this ten-year period. The Public Defender made the case for the new positions in a departmental budget hearing, noting unmanageable caseloads. The new positions will cover an array of staffing needs including attorneys, mitigation specialists, paralegals, recruiters, supervisors and interpreters in order to better mange workloads. 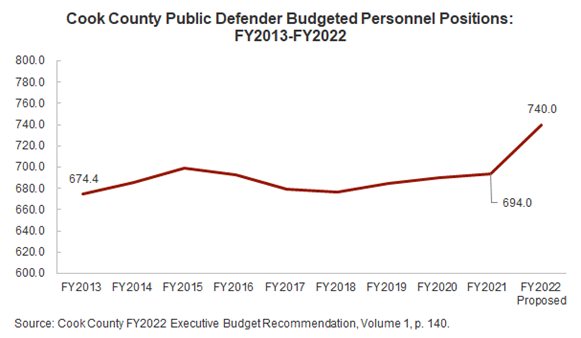 We welcome any questions and feedback about the content of this blog. Please e-mail civicfed@civicfed.org with your query.