The 55-second video shows officers at the downtown Minneapolis apartment unit to serve a search warrant in connection with a St. Paul homicide investigation. Locke was not the subject of the warrant.

Minneapolis police body camera video released Thursday night showed several officers rushing into a downtown apartment shouting “Search warrant!” and then shooting and killing Amir Locke as he stirred beneath a blanket on a couch with a gun in his hand.

The 55-second video, first in slow motion and then real time, shows the SWAT officers enter and close in on the 22-year-old Locke with their guns drawn and equipped with mounted lights that illuminated the otherwise dark apartment. The incident Wednesday morning unfolded in seconds before Locke was shot and killed.

The officers were at the seventh-floor unit of the Bolero Flats Apartment Homes, at 1117 S. Marquette Av., shortly before 7 a.m. to serve a search warrant in connection with a St. Paul homicide investigation.

The video shows police turning the key quietly. As soon as the door was opened, multiple officers yelled, “Police search warrant! … Get on the [expletive] ground!”

Locke is moving beneath the blanket, a handgun emerging in his right hand before one of the officers fires three times, knocking Locke to the floor. That’s where the released video stops.

Amir Locke’s parents, Andre and Karen Locke, declined to comment about the shooting, other than his mother saying, “We want justice for our son.” Jeff Storms, an attorney representing the family, confirmed earlier Thursday that Locke’s family viewed the video before its release.

Storms is partnering with civil rights attorney Ben Crump, who has won significant financial settlements for several families across the country who have lost loved ones to police violence in recent years, including a record $27 million settlement with the city of Minneapolis for the family of George Floyd.

Authorities identified the officer who fired the fatal shots as Mark Hanneman. Huffman coordinated the video release with investigators at the Bureau of Criminal Apprehension (BCA) “without compromising the integrity of their investigation or their ability to collect evidence,” read a statement from City Hall.

Crump and Storms said Locke has several family members in law enforcement and has no criminal history, and he was in legal possession of a firearm at the time of his death. Locke would not have been required to have a permit to possess the weapon in a private residence.

“Like the case of Breonna Taylor, the tragic killing of Amir Locke shows a pattern of no-knock warrants having deadly consequences for Black Americans,” Crump said in a statement. “This is yet another example of why we need to put an end to these kinds of search warrants so that one day, Black Americans will be able to sleep safely in their beds at night.”

Three sources from separate law enforcement agencies told the Star Tribune that Locke was not the target of the St. Paul homicide investigation. They spoke on the condition of anonymity because the case remains under BCA investigation.

Police officials said that a loaded handgun was recovered at the scene.

One of Amir Locke’s cousins said Thursday there was nothing violent and hot-tempered about him.

“He was totally the opposite,” said 21-year-old Ervin Locke Jr., who recalled the two of them catching up on the phone just last week. “All he did was crack jokes.”

He said the man he’s affectionately known all their lives by the nickname C-Mo “was no street person. All he was into was music and playing basketball. He stayed to himself.”

According to a dispatch report, police informed a dispatcher around 6:19 a.m. that they would be going into Apartment 701 at Bolero Flats. A comment added to the report showed that police would “AIR WHEN ABOUT TO EXECUTE THIS RISK – NO NOISE EXPECTED” — suggesting that they were carrying out a no-knock warrant. By 6:48 a.m., police called medics from Floor 7, indicating that someone was shot, the report showed. CPR was started three minutes later as officers brought the man, later identified as Locke, down to medics on the first floor. He was taken to a nearby hospital, where he was pronounced dead.

About 7:04 a.m., an officer said on the radio that police were “transporting” a woman to Room 801, an office at police headquarters that is used for interviews. It’s unclear whether the woman in question was in the apartment with Locke.

Hanneman was the only officer who fired, striking Locke twice in the chest and once in the wrist, according to a separate report.

A search of court records showed that the warrant to support the raid hadn’t been made public as of Thursday afternoon.

At a Thursday night news conference with Mayor Jacob Frey, Huffman said the department will reexamine its policies following the shooting. She defended a statement Wednesday that police announced their presence before crossing the threshold into the apartment, although the video indicates the officers were shouting as they entered. She also contended the barrel of the gun Locke was holding was pointed toward an officer outside the video frame.

Frey said the “video raises just about as many questions as it does answers. We intend to get answers as quickly as possible.”

Questions from reporters mostly ended after civil rights activist and attorney Nekima Levy Armstrong approached Huffman and Frey, and said their handling of the shooting made her doubt her decision to work with the city on preventing further police violence. 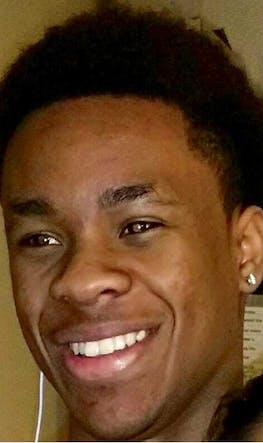 “This is unacceptable, I’m sorry, it is,” Levy Armstrong said. “When I agreed to work with you … we talked about the importance of transparency and accountability, and what we are seeing is business as usual.”

Referring to the decision to execute St. Paul’s warrant, Levy Armstrong asked: “Why in the hell would you all sign up to do this in the first place?”

The MPD’s initial press release about the encounter referred to Locke as “a suspect,” although not necessarily in connection with the St. Paul homicide investigation. Huffman said that at the time the release was issued, “it certainly was unclear yesterday but it remains unclear if or how Mr. Locke is connected to St. Paul’s investigation.”

Earlier Thursday, pressure to release the video mounted on the city, as leaders from U.S. Rep. Ilhan Omar to City Council members Jason Chavez and Robin Wonsley Worlobah called for all footage to be made public. That demand was echoed in a letter to Huffman and Frey from members of the Minneapolis delegation of the Minnesota House.

In a statement released after the shooting, Police Officers Federation of Minneapolis president Sgt. Sherral Schmidt said the union was thankful that all of the officers involved were “safe.” She said that the officer who shot the man was forced to make a “split-second decision to save his life and the lives of fellow officers.”

Wednesday’s shooting has revived a simmering debate over the use of so-called “no-knock” search warrants.

The use of these unannounced raids, which allow police to enter a property without announcing their presence beforehand, have been banned in cities across the country after they resulted in the deaths of innocent civilians. Minneapolis restricted the practice in 2020, but it is still occasionally used in certain cases.

While police have defended the use of no-knock raids as necessary for keeping officers safe while apprehending violent suspects, critics say it puts lives at risk.

Paul Applebaum, a private defense attorney, said no-knock warrants are often used in drug and violent crime cases, but that with the expansion of surveillance technology police should be able to apprehend a suspect without such a show of force.

“It seems like the risk is greater than the reward of preserving evidence or not having a shootout or all that,” said Applebaum, who has sued officers for alleged misconduct. “It’s like, just go sit in the lobby behind a newspaper and wait until he comes out.”

Another problem, he says, is that judges tend to be deferential to law enforcement, signing off on no-knock warrants “without thinking about the potential repercussions if something goes wrong.”

“And this is what happens,” he said.

Under the current Minneapolis policy, officers must identify themselves as “police” and announce their purpose as “search warrant” before entering any domicile — regardless of whether a judge signed off on an “unannounced” or “no-knock” entry. Once inside a residence, officers are supposed to periodically repeat those announcements in case occupants didn’t hear them. The same rules, which mirror those already in place across the river in St. Paul, also apply for arrest warrants.

The practice, most often used by SWAT officers, should help maintain the element of surprise and preservation of evidence while eliminating confusion about who’s entering the building, a police spokesman said at the time.

Policy dictates that no-knock warrants would be acceptable only in high-risk circumstances such as a hostage situation, when “giving an announcement would create an imminent threat of physical harm to victims, officers or the public.” Some exceptions apply, but investigators need to obtain permission from the chief of police or his or her designee.