Violent crime rose nearly 40 percent in Aurora from 2019 through 2021; driven by aggravated assaults

Wirepoints recently reported on how Illinois’ fifth-biggest city of Rockford is struggling to contain violent crime. It’s up 26 percent since 2019. A look at the numbers in Aurora shows that Illinois’ second-largest city is in the same situation.

City data shows that violent crime – which includes murder, robbery, criminal sexual assault, and aggravated assault/battery – was up 38 percent in 2021 in Aurora versus the baseline pre-Covid, pre-George Floyd year of 2019.

That included a remarkable 128 percent increase in criminal sexual assault and a 44 percent jump in aggravated assault and battery.

However, over that same three-year span, murder was down by half, robbery by one-third, and burglary by 42 percent.

Reported property crimes were down slightly, by two percent. 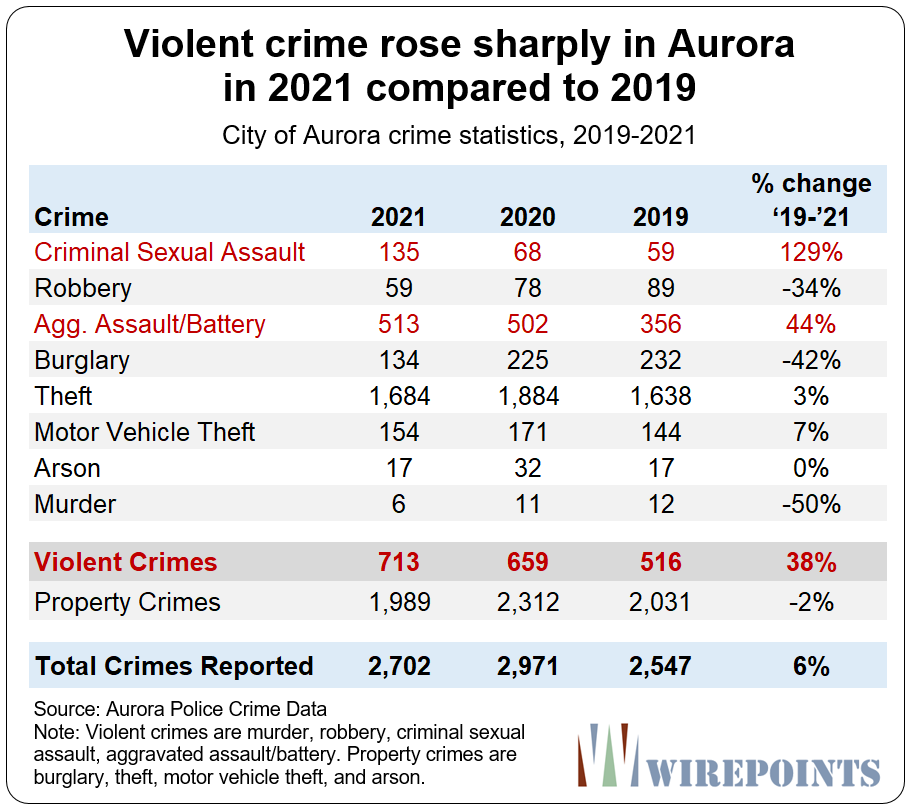 According to more-recent data provided to Wirepoints by the Aurora Police Department, despite a decline in Covid, violent crime hasn’t started to go down yet this year.

Violent crime is still up 5 percent in early 2022 versus the same period last year, driven by aggravated assaults that are 19 percent greater.

An encouraging sign is that so far, property crimes are down 27 percent from the first trimester of the prior year, and overall reported crimes are 20 percent lower.

Aurora Police recently offered their take on the two striking increases. They said aggravated assaults rose due to Covid and economic stressors which persisted through 2021. For the big rise in criminal sexual assault, Aurora Police said more crimes were being reported because state law was changed to do away with the statute of limitations, bringing more cases forward.

If both of these explanations are right, comparable Illinois cities that currently report the same data should have seen similar increases in both subcategories over the same period. We ran some numbers to get a better sense of whether the city’s take is on the mark, or not.

Among Illinois’ 20 largest cities, four others comparable to Aurora have made both 2019 and 2021 data directly available online for criminal sexual assault and aggravated assault/battery.

None showed anything like an equivalent rise to Aurora’s in criminal sexual assault. Chicago stayed flat, and Springfield even dropped by 26 percent.

Decatur’s jump of 67 percent was notable but maybe at least partly due to a slightly broader definition of sex offenses being used by the city in 2021 compared to 2019. This is as Decatur shifts from the Uniform Crime Reporting (UCR) system to the more expansive National Incident-Based Reporting System (NIBRS).

But aggravated assaults were up by far less in Springfield, 23 percent, and by just 3 percent in Chicago. Again, the limited data we have is inconclusive. 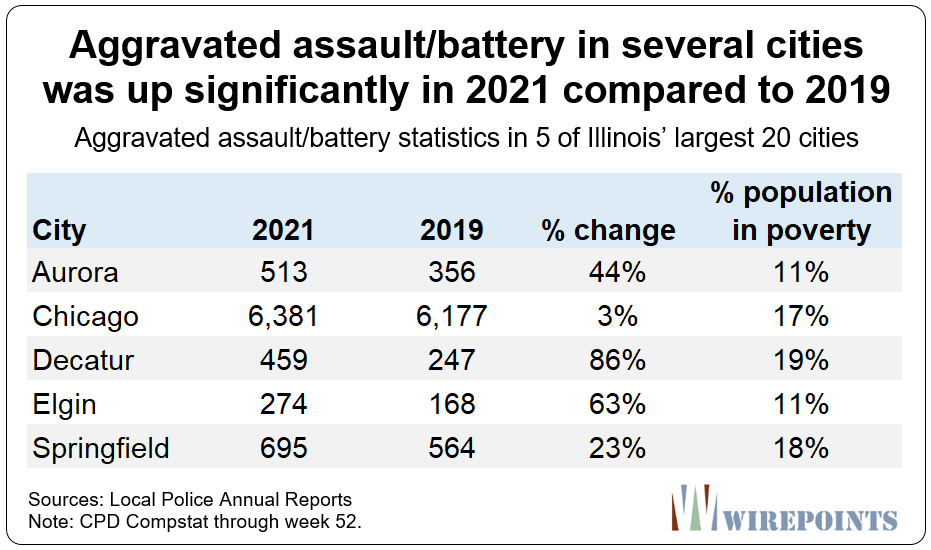 However, Public Information Officer Paris Lewbel of the Aurora Police Department told Wirepoints the city stands by its recent analysis.

And regarding the more than doubling of criminal sexual assault reports from 2019 to 2021, he said, “when we dug through the data,” many of the reports filed in 2021 occurred years back, beyond the state’s old statute of limitations. Lewbel said that “was where we saw the increases coming from.”

Though it’s difficult to pinpoint causality, the violent crime surge in Illinois’ second biggest city should sound alarms statewide. Another long, hot, and quite possibly crime-filled summer looms in Cook County and its collar counties. That includes Aurora.

Across the board, local and state politicians, as well as police and judges will need to do their utmost to send a real message of deterrence to criminals. That means arrests, prosecutions, and when warranted, convictions and incarcerations. The state’s future depends in part on their doing so.